For some people, yoga has become a lifestyle, while others just consider it an addition to their exercise routine.

Those who have fallen in love with yoga swear by the health benefits they have observed such as: increased strength and flexibility, sleeping better, keeping sickness at bay, releasing nerve blockage that causes pain, improving posture, and achieving peace of mind.

But not all yoga movements can be practiced by everyone.  Yoga, however can be adapted for all ages, levels of flexibility and health conditions, and one of the ways to do this is to try aerial yoga.

Aerial yoga meets you exactly where you are at.  And where you are at changes every day!  The hammock can take up to half of your body weight if needed.  This allows you to gradually build up strength and stamina in a safe and relaxed way. 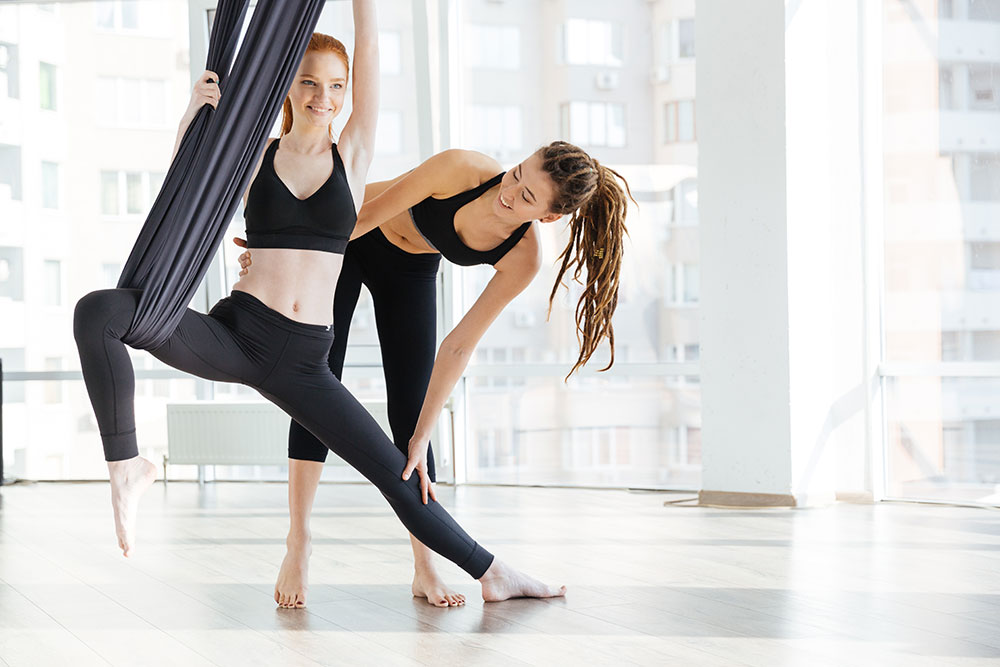 What is aerial yoga?

Aerial yoga is a relatively new type of yoga that originated out of New York in 2007. It is a combination of traditional yoga poses, dance, and Pilates with the use of a hammock. For beginners, it offers a level of support in each pose to help students learn and practice proper alignment as strength improves. This discipline enables you to perform yoga poses that can be more difficult on the ground.

You may hardly imagine yourself hanging upside down a few feet from the ground, but the truth is that aerial yoga is quite accessible and similar to yoga exercises performed on a mat. Known as the beginner-friendly yoga, aerial yoga represents the best solution for the average person for offering the following advantages:

As you stand up or sit on a chair almost all day long, your vertebrae are being pulled down into each other by gravity. Flipping yourself upside down allows your spine to be free of pressure and feel relaxed and lengthened.

All body parts move and stretch when you practice aerial yoga, and the various movements you perform are beneficial for your muscles and joints.

Like many other types of yoga, aerial yoga improves your digestive system activity through stretches and movements and helps heal digestion-related issues like constipation.

Working against gravity requires you to make use of your balance and stability, and you start to see an improvement when it comes to balance while performing your daily activities as well.

Putting you in a good mood

Physical activity, including aerial yoga, releases the so-called happiness hormones, such as serotonin and endorphins, which makes you feel more energetic and in a better mood. Some experts consider that being suspended above the floor upside down may encourage your brain to release even more serotonin, which will make you feel serene and even euphoric.

Helping with back problems

Handing upside down freely allows your spine to lengthen and the smaller amount of strain on your back can provide instant relief from spinal cord tension and pain.

Aerial yoga clears your mind by putting you into a meditative state and ultimately combats stress you have accumulated throughout the day and week. Less stress also means you will enjoy better health.

Inverse poses like Sirsasana and Halasana become much easier in air, and other traditional yoga poses like Gomukhasana and Tadasana are easier to do while suspended in air.

Hold poses for a longer time

When you can hold a pose for a longer time while performing aerial yoga, you gain a better understanding of yoga poses that can be implemented on the ground.

Practicing aerial yoga requires mental focus and challenges your nervous system as you move your body into poses you have never tried before.

Pulling movements are not found in traditional yoga practice (for instance performing pull-ups), and most postures involve repetitive pressing, which can cause muscular imbalances and stress injuries. When practicing aerial yoga, on the other hand, the act of pulling yourself up in the hammock enables you to perform both pulling and pressing, keeping you balanced.